Pomegranate juice (PG) was recently studied in a randomized placebo-controlled trial conducted by the Nephrology Department of the Western Galilee Hospital, Israel. The study showed an increase in innate immune function and a decrease in the progression of the atherosclerotic processes.

Pomegranate juice contains vitamin C as ascorbic acid and polyphenolic flavanoids with the highest concentration in the juice from its skin. Tests show it has more potent antioxidant effects than red wine. An earlier paper on pomegranate juice reported in patients with high blood pressure that a reduction of 2-5mm systolic pressure reduces risk of CV complications.

The benefits of the juice were:
1. an improved lipid profile
2. reduced blood pressure and
3. improved heart function.
These three factors had not been studied in hemodialysis patients before with juice.

Key findings in the study include

Pomegranate juice has also been found to inhibit the growth of colon, lung, prostate ,breast and cancer cells

The biologically active components in Pomegranate juice that have been found to be protective against certain types of cancer are called ellagitannins ( a class of polyphenols). Ellagitannins can be further metabolised in gut into Ellagic acid and further into urolithins by the microfloria. 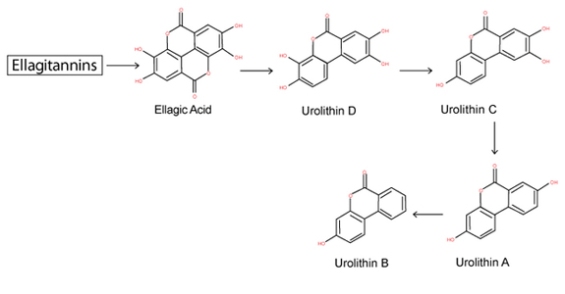 Invitro studies on Urolithins have shown they can deactivate at least 2 cancer growth pathways. The first pathway cited is the MAPK pathway(1,2), the MAPK is chain of proteins  that is involved in cellular growth and differentiation, in cancer they can get stuck in the “on“ position signalling uncontrolled growth (tumorigenesis) and resistance to apoptosis (programed cell death)(3). The other pathway of significance which Urolithins can inhibit is the Wnt pathway which is again responsible for cellular proliferation and differentiation, in colon cancer up to 90% of tumours show mutation in this pathway resulting in unregulated cellular growth and proliferation(4). Urolithins because of their abundance in the gut show very encouraging results for colon cancer.

While the metabolites of ellagitannins have experimentally shown anti-cancer properties, ellagitannins as a complete compound have in some studies been found to be more potent than the isolated metabolites. David Geffen from Center for Human Nutrition, School of Medicine, University of California showed that it was ellagitannins that supressed colon cancer cell inflammatory enzymes and that when Ellagic acid was administered on its own it was not effective. In another study it was found that pomegranate fruit extract modulates the expression of Cyclin-dependent kinase inhibitor protein which functions as a tumor suppressor gene, resulting in the inhibition of cell growth and apoptosis (programmed cell death) of the tumor (7). These examples highlight the benefit of a whole food extract over to an isolate.

Other health benefits from Pomegranate Juice

Enter Tre’
Tre’ is a potent and unique combination of the purest extracts of Pomegranate, Acai Berry, and Green Tea, enhanced with resveratrol and alpha-lipoic acid, and sweetened naturally with the nectar of the Agave cactus. Tre’ is the perfect source for you to get the benefits Pomegranate Juice in a natural whole food form. To learn more about Tre’ click here